Why Compensation Is Broken

I’m currently listening to Netflix’s new book No Rules Rules and finding it quite interesting. But there was a particular chapter that led me to write this post. The title of the chapter is Pay Top of Personal Market and it’s pretty self-explanatory.

But a TLDR would be something like: If you want to keep your best talent and all they bring to the table, you have to pay them top of their market.

If you worked in companies with a similar ethos to Netflix in regards to compensation, you probably don’t need to. But have a look at the following list of questions anyway:

If you answered yes to any of these questions, you should keep reading. Regardless if you come at it from a contributor or a leader perspective, hopefully, you can learn how to navigate compensation better in the future.

How it really works

As mentioned above, at Netflix, the idea is that you hire the best talent and you pay them right. And in their case, this means paying top of the individual’s market rate. But what does this mean? And how it happens for most companies?

Let’s say a Senior Software Engineer salary in London can go from around £70k to around £100k. If a company follows Netflix’s approach, they’ll hire the very best talent out there and they will pay them, for example, around £105k. The top value of the market plus 5%. They will review existing employees salary following the same rules. This makes other companies' job harder when it comes to stealing their top performers.

This is not how most companies operate though. The amount of talent swap is huge. It’s hard to quantify how much domain knowledge gets lost throughout this process. The diagram below represents my view of the most ridiculous part of the process. Something so obvious but that for some reason, a lot of companies are not seeing or considering. 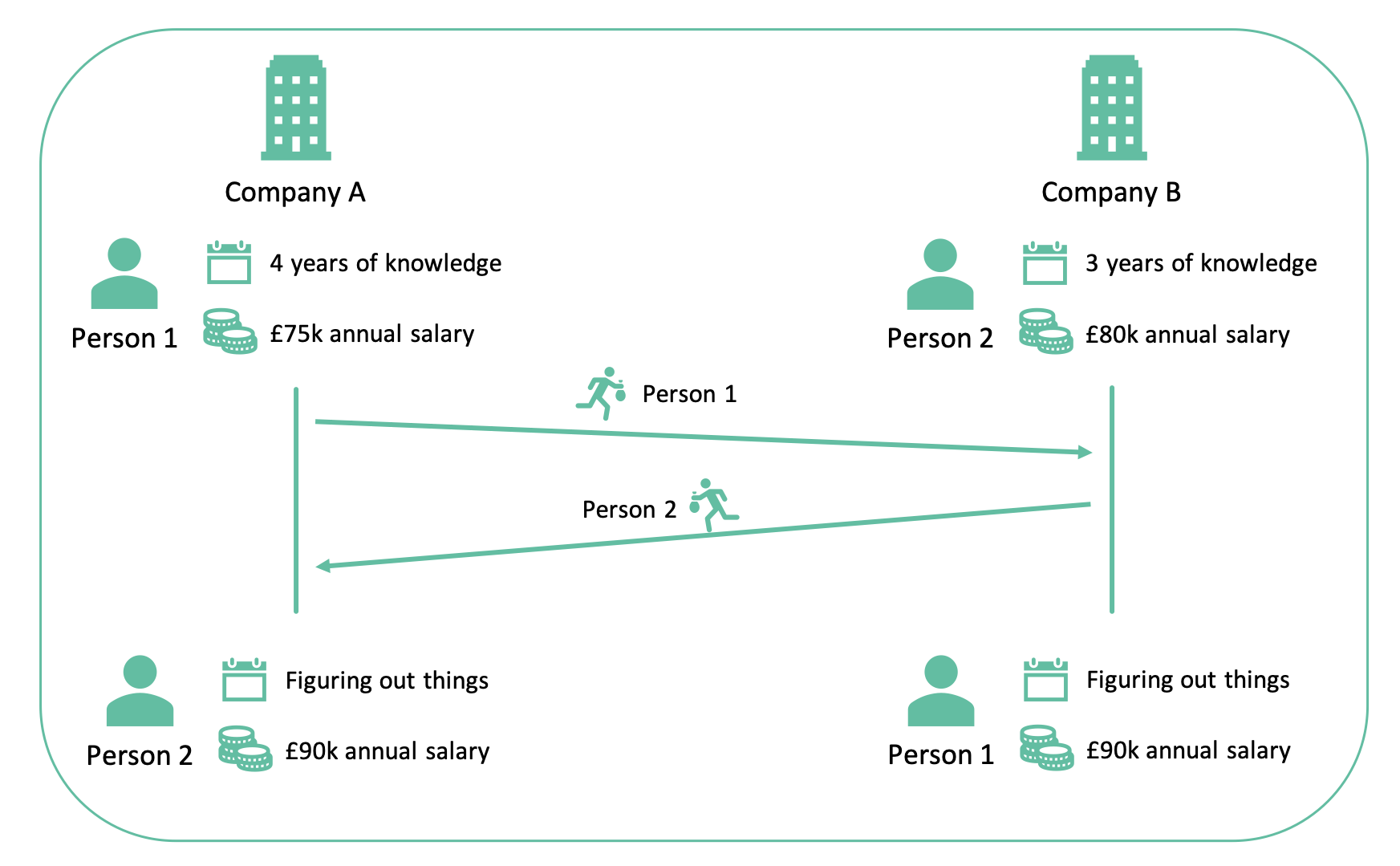 Both companies end up paying a £90k salary to their new employee and losing a combined 7 years of domain knowledge. Why not reward their original employee and keep all that knowledge in-house. And to be clear, they shouldn’t need to ask for that raise, companies should do that pro-actively.

Why does this happen? I see two main factors at play here:

There’s more to it than just using market data

Starting with problem number 1 above, a lot of companies won’t even be aware of what the market is paying. They’ll reward their people and bring new people in at the average rate they currently pay for a specific role.

This will not work though, they’ll fail to attract talent unless they pay the market rate. So even if they’re not actively aware of it, they’ll have to follow it. This will create a big gap between their longest-serving and more recent employees. If people share their salaries, this alone can bring a whole set of different problems.

Those companies need to look at market rates and review their employees' salary accordingly. If they fail to do so, they won’t be able to keep anyone for long. When they do, they need to make sure they don’t fall on the same mistake many companies do even when they have that data. They need to align their salary ranges at the top market rate, and not the average as many do.

While it’s better than doing nothing, it still leaves a big chunk for recruiters and other companies to explore. Your top talent will be harassed constantly and will eventually leave.

This brings me to problem number 2 and how companies could leverage transparency to help. Especially if they’re struggling with number 1.

Be transparent about it

Another particular part I found interesting was about companies being transparent and open about the topic.

This should in fact be their starting point. Even, and especially if they struggle with the problem above. With an open culture where people are encouraged to speak about compensation, they’ll already be in a much better place.

If salaries are a sensitive topic, employees will find out their real market rate from recruiters and other companies. At the same time, they won’t have the courage to speak up and discuss their salary with their manager. The result is they’ll eventually hand their notice rather than start a conversation. By then it’s too late for anything to be done about it.

Encourage compensation conversations in your company, speak up openly about it. In such a culture, people will come forward sooner and there’ll be an opportunity to fix things before they have to leave.

Ideally, a company pro-actively and regularly reviews their employees' compensation but this takes time to put in place. So start with transparency and let people know it’s ok to figure that out elsewhere. And more importantly, it’s ok for them to come forward and share that and the data they get from it.

Guess what? You’ll start to have an overview of the market even if you’re not actively researching it.

Set up clear expectations, career and growth plans for everyone. Motivate people to stay in the business not just from a monetary point of view. Connect both things. With the right process and level of transparency, people will be able to visualise their growth and how it’ll be recognised and valued.

Put it together with a clear business vision and how their work contributes to it, and that’s your ultimate motivational package right there.